Mahon Plumbing will remain open to service all of your plumbing needs 24 hours a day and 7 days a week.  As a valued customer, and member of our shared community, your safety and wellbeing are our top priority. Please see the attached precautionary measures we are taking as a company to continue to serve your plumbing needs. 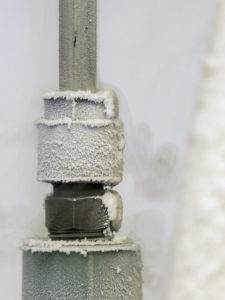 Frosty temperatures, snowfall, and ice can make the shifting seasons wreak havoc on your plumbing system and pipes.

Winters in Maryland can be particularly unforgiving, with temperatures often hitting 30 degrees and below during a typical season. Frosty temperatures, snowfall, and ice can make the shifting seasons wreak havoc on your plumbing system and pipes. There are a few common plumbing problems that can happen in winter, which could potentially cost you thousands of dollars. Here’s what to look out for.

When the temperature outside gets too cold, this can cause interior pipes that are located closely to the exterior of your home to potentially become frozen. When a pipe freezes, it will start to back up, which can eventually lead to burst plumbing pipes. A telltale sign that a pipe has frozen is a slow trickle from the faucet, or no water coming out of the faucet whatsoever. If you notice that your pipe has frozen, contact Mahon Plumbing immediately for a service call. A burst pipe can potentially cost thousands of dollars in damages, so it’s best to take care of it immediately.

You’ve been running your bathroom sink faucet and noticing that it’s taking longer than usual to drain, or not draining whatsoever. Perhaps you’ve even been washing dishes in your kitchen sink and seeing food particles floating around, circling the drain instead of freely flowing into the drain. These are all common signs that your drains are clogged. To avoid this problem, be sure to dump all food into the trash rather than using your sink’s disposal. In the meantime, you’ll want to contact a professional at Mahon Plumbing.

Sump pumps are frequently used throughout the winter due to the consistent melting of snow and ice. Your sump pump may backup due to the increased usage, which results in a failure to drain or run. A sump pump backup can also potentially cause flooding within a home, which could be disastrous to your belongings and the foundation of your home. Fortunately, Mahon Plumbing is available for emergency service calls 24 hours, 7 days a week. To avoid this problem entirely, schedule routine maintenance on your sump pump on an annual basis. In doing so, you could potentially save yourself money in the long run.

If you still have more questions regarding your plumbing, we here at Mahon Plumbing are here to help. We have been serving the wider Baltimore area since 1994, so we have 25 years of experience to back up our fantastic service! Call us at our Baltimore location at 410-766-8566 or our Pasadena location at 410-636-7944. Be sure to keep up with us on social media by following us on Facebook or Twitter.

Categories: Helpful Tips | Tags: pipes, plumbing, and winter plumbing
This entry was posted on Friday, January 29th, 2021 at . Both comments and pings are currently closed.